How about some British Geology?


With my head throbbing due to the new demands being made on the 'grey matter' lately, I think it's time to take a 'timeout' from Open University study and have a little look at some examples of the geology that Britain has to offer. My post vacation obsession with Arizona and Utah, has meant that Britain has been somewhat overlooked in this blob, so time to redress the balance a bit. While obviously smaller in scale, Britain's geology is no less interesting.


For example, it's not only the southwest USA that can point to spectacular arches! Oh yes, here in the U.K. we have some awesome examples too. Okay, granted, we can't really boast 200 plus in one National Park like Utah, but nevertheless we have some spectacular coastal examples, such as in the photo I included at the end of my last blog:- Durdle Door on the south coast:- 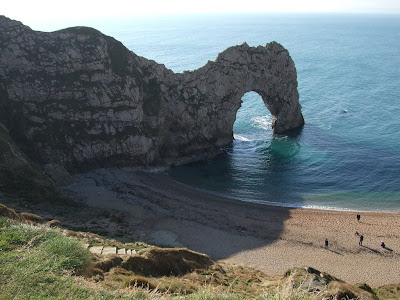 Who guessed right? Yes, it's Durdle Door in Dorset, England.

(Photo by 'drumaboy @ Flikr.com and reproduced here under the Creative Commons License)

This arch was formed by the sea eroding though lines of weakness in the Purbeck Limestone which comprises the arch. For more information on the formation of Durdle Door, there is an excellent web site produced by Ian Wilson from Southampton University. To visit it click here

One of my favourite regions in Britain for sheer, spectacular beauty is the Lake District. I spent several walking holidays in my youth clambering up the awe inspiring fells. My favourite peak by far is Helvellyn and at a relatively modest 3117 feet above sea level, it's ascent never the less is still a challenge, especially negotiating the imposing 'Striding Edge' shown here:- 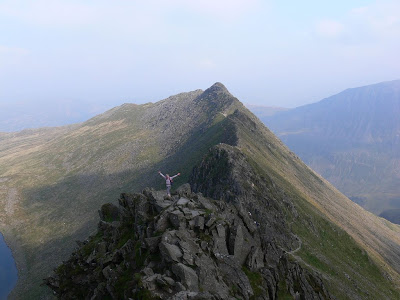 This magnificent 'knife-edged' ridge or 'arete' was formed as two opposing glaciers started out on their respective journeys down their valleys, carving out the rocks beneath and behind them, until they met, forming this breathtaking ridge. I've managed to negotiate Striding Edge on two occasions and thankfully got to the top safely enough. I believe there are a few people over the years however, who have not! Negotiating the ridge can be a bit scary on a windy day and there have been a few who have a made a rapid descent. Incidentally, the photo above reminds me of a book I have called "Over the Edge" which as I think I have mentioned before, is a somewhat macabre record of the deaths in Grand Canyon. The girl in the above pic is doing what so many have done at various viewpoints at Grand Canyon, with a two thousand foot drop to their sides! After a split seconds loss of concentration - whoops, one messy descent! The drop at Striding Edge might not be quite as great, but it's certainly no less messy if you slip!

I'm sure somewhere I will have stored away, a whole load of photos from my vacations to the Lake District and will have a few of Helvellyn and other beautiful features from the area. I think I'll go and have a 'butchers' and see what I can find! Anything interesting I will scan and post them on my next blog.

So until the next time!

Yeah, I know, bizarre innit? And the marks I lost on the CMA were REALLY stupid errors like writing a number from the question down wrong!?! So, a good start, but it's maths next and then chemistry after that, so the going is definitely going to get tougher, but that just means more of a challenge. Bring it on!!! 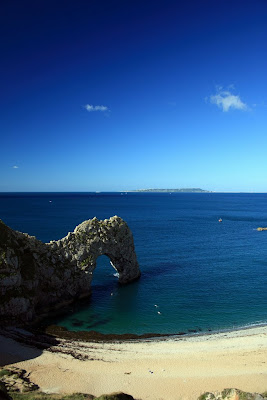