Education - it's a wonderful thing!

After finally getting the less than inspiring 'S170: Darwin & Evolution' course out of the way, I'm now already into the next challenge, which is another 10 credit, Science Short Course entitled S186: Volcanoes, Earthquakes and Tsunamis. And what a cracking course this promises to be!
The leader of this particular module is none other than David Rothery, the volcanologist whose talk I attended last month at the Open University Open Day to mark 40 years of Earth Sciences courses at the OU. (Click here for my post about it)
After witnessing David's talk about his media involvement during the Icelandic volcanic dust storm crisis, it became a 'must do' from that point on. The man is clearly passionate about his subject, but doesn't take himself too seriously. One interview he did for ITV News in particular needs to be seen! Click here to view it. Watch out for the amazing disappearing car! My wife Ruth, doesn't seem to understand quite why I find it so hilarious, but it tickled me, but then, I'm easily amused as Ruth will tell you!
I only received the course materials last weekend, but I'm already hooked in a way that I never was by the Darwin course. It's all down to the style of writing I think. Ruth, who is an English graduate (with FIRST CLASS HONOURS I hasten to add) would be able to explain exactly how and why the writing was so dull and uninspiring on that course and how in just a few opening paragraphs of this new course I am totally hooked! It's not as if I wasn't interested in 'evolution' either. I started off keen enough, but the dullness of the course book killed off the enthusiasm entirely, which was a shame!
Anyway, I mustn't dwell on the negative, but concentrate on the delights of 'volcanoes' and already some long held misconceptions have come to light and been soundly kicked into touch. Firstly, I've always been led to believe that the earth's crust lies above a viscous but generally liquid mantle. Plates move about over considerable lengths of time, moving apart at constructive boundaries and moving together at destructive boundaries but by and large, it's pretty much liquid down there. WRONG! The very first sentence of the opening chaper of the course set text 'Teach Yourself Volcanoes, Earthquakes and Tsunamis', by the course leader states:
"It is a common misconception that the interior of the Earth is molten".
Er, yes indeed. Oops! But then as I read on it becomes obvious that it simply cannot be. Pressure, obviously, ensures that despite it's heat, most of the rock in the mantle is in fact solid. Hmmm!
Secondly, regarding plate tectonics, Mr Rothery drops this bombshell on page 11:
"it is important to be clear that these tectonic plates are not rafts of crust moving over the mantle. The Earth's crust is firmly joined to the part of the mantle immediately below it".

That was a bit of a revelation too in that the top 100 km or so of the mantle is just as strong as the crust and is joined to the crust to make a single 'mechanical layer'. Interesting stuff!

Third eye opener concerned the next layer down, that of the lower mantle. This layer it turns out while not rigid, is neverhteless solid and yet slowly circulates at a rate of a few centimetres per year. Now this is a difficult concept to grasp but a good analogy is to compare the rock of the lower mantle with say, a slab of Devon toffee! Okay, a bit bizarre, but stay with me okay? Now, put the slab in the fridge for a while and it will be hard enough to shatter if whalloped with a hammer. Go on try it if you've got a spare slab lying around! However, if you leave another slab in the fridge with slightly less than half its length overhanging the fridge shelf and leave it for a few months, it will eventually bend over the shelf. Okay, I've not actually tried this myself - there's little or no chance for a slab of toffee surviving for long enough in my house antway, but I'm told it does work! Anyway, my point is that, yes the toffee is obviously solid, but will still bend if given sufficient time. So it is with the rock that makes up the lower mantle which is subject to what is called 'solid state convection'.

And all this is even before the course (or 'module' as the OU now like to call them) officially starts on Saturday 13th! And I haven't even mentioned 'cowpat bombs' yet!?! Maybe next time dear friends!

Well, it's taken a while, but I finally persuaded Anna to download the photographs she took on our brief visit to Flamborough Head while on holiday in Lincolnshire back in early August.


So, Flamborough Head is located off the east coast of England, north-east of the coastal town of Bridlington. My family and I started this particular day with a visit to the rather disappointingly sad spectacle of Scarborough, a place which rather reminded me of Blackpool 'up north' - all a bit run down and desperately trying to return to it's former glory days of the fifties and sixties. I kinda felt that these types of seaside holiday resort need to reinvent themselves somehow. The days of donkey rides and 'Kiss me Quick' hats are long gone I think!
Anyway, our detour to Flamborough was the highlight of the day - for me at least! For those wishing to visit, there is plenty of parking space available near the lighthouse and access to the chalk cliffs is possible down some scarily steep and slightly uneven steps, but it's worth the effort, trust me! 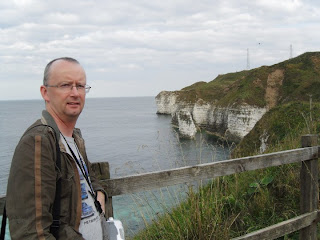 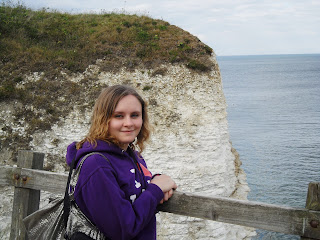 The photo of me was taken by this lovely person, my step-daughter Anna-Ruth. The equally lovely Amy, her younger sister, declined the opportunity to descend the steep steps and stayed up top with her mum!
Anna-Ruth by the way, studied for a GCSE in Geography virtually on her own. The teaching for this subject seemed pretty rubbish in truth, so it's to her enormous credit that she passed it so well! On our walk down the steps (see later photo!) she proudly pointed to the stack and told me all about its formation, so there's definitely a potential geologist deep within her! She currently has her heart set on drama, but you never know!
Now here's a thought . . . she could forget drama and do a Geology degree instead! We could even study at the same time on the same course? How cool would that be? Actually, to the average teenager, that would probably be the most embarrassing thing ever! In a classroom with their 'old man'!?! OMG!!! 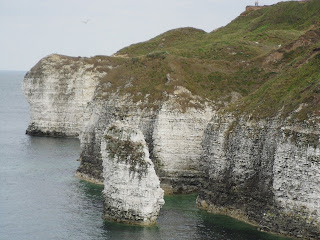 'Nature' - the worlds greatest sculpter!
Anyway, I digress. The most striking thing about Flamborough is the distinctly layered chalk cliffs and their associated features. The great accumulation of tiny, fossilised sea life that make up this rock took place some 70 - 90 million years ago. The classic stack shown above, formed comparatively quickly over thousands of years. Constant battering of the now exposed rock by the waves, erodes weak areas in the rock eventually creating caves. Where this occurs on an area jutting out into the sea the cave will eventually break through to form an arch. With further erosion the roof can collapse to form an isolated lump of rock - the stack shown above. 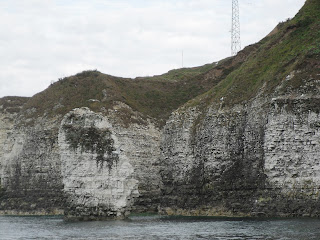 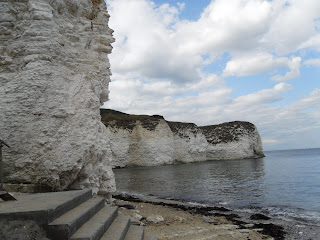 I have since learnt that there is a fine example of an arch here, I think on the far right  in the above photo, though from our view point we couldn't see through it! 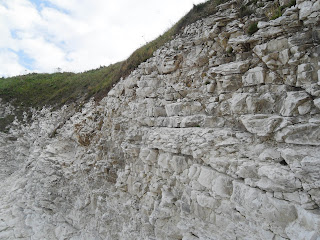 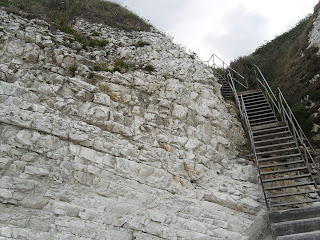 See what I mean? Scary steps, but solid and safe enough! 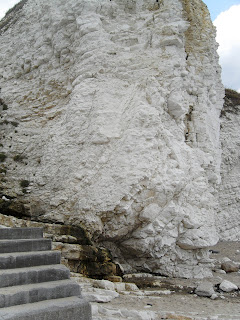 Okay, now this is where I need some help. Maybe in 'x' years time after I've actually done my geology degree, the answer to this will be more obvious, but I am currently a bit puzzled by this photo. Throughout the cliffs, the chalk layers are either horizontal or dipping about 10 degrees or so. Here however, at the bottom of the steps there is this section which seems to fold upwards as can be seen at lower right of the photo. At the upper middle of the photo the beds are at about 80 degrees from horizontal! So whats gone on here? Seems a quite localised fold that's quite out of step with the surrounding features!?! Answers on a postcard to . . . .﻿ 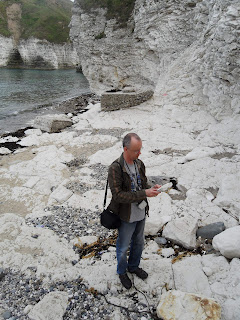 Me looking for fossils but not finding anything significant - or even insignificant for that matter! 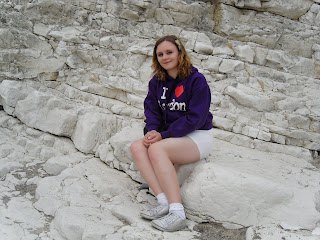 Beautiful! Anna obviously, not the layered chalk and dipping beds! Obviously!
So there you have it. The geological delight that is Flamborough Head - go visit next time you are on the east coast!
Cheers for now,
Alyn.
Posted by Alyn at 11/05/2010 01:41:00 pm 2 comments: